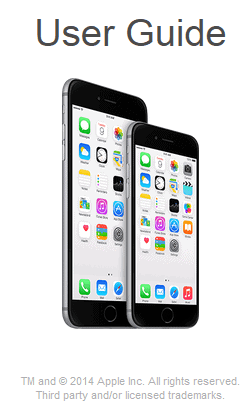 The iPhone 6 series includes a number of major changes over its predecessor, including a streamlined design, models with larger 4.7-inch and 5.5-inch displays, a faster processor, upgraded cameras, and improved LTE and Wi-Fi connectivity. The iPhone 6 has received generally positive reviews, however, the plastic antenna strips on the rear of the phone were criticized for resulting in poor aesthetics, the display having lower resolution and pixel density in comparison to other recent smartphones.

Getting the most out of your Apple smartphone requires some understanding of how to use it. That’s where having the owner’s manual comes in handy. With proper usage, there is less risk of damage, and you’ll learn how to get the most out of it.

Please be sure to read and save the entire manual before setting up or using your Apple iPhone 6. Misuse may result in damage to the unit and/or cause harm or serious injury. Download the manual and save it for future reference.

Improvements such as performance, battery life, VoLTE support, and other tweaks were also noted. In conclusion, the iPhone 6 was considered good, even great, but there’s little about it that’s truly ambitious or truly moving the needle. Love it or leave it, you should check out the user manual for details.