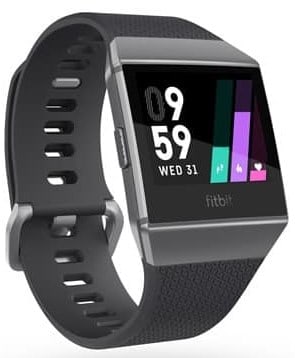 The Ionic is Fitbit’s most modern device to date, featuring a colorful LCD touchscreen and advanced sensors. It also serves as the launch for some new Fitbit services, like a fully-fledged operating system called FitbitOS, contactless payment, and a subscription-based custom workout guide called Fitbit Coach.

Getting the most out of your fitness tracker requires some understanding of how to use it. That’s where having the owner’s manual comes in handy. With proper usage, there is less risk of damage, and you’ll learn how to get the most out of it.

Manual for the Ionic

Get started with your Fitbit Ionic and find out how to make the most of features like sleep tools, exercise modes, and more, with these short and sweet how-to videos.

Please be sure to read and save the entire manual before setting up or using your Ionic. Misuse may result in damage to the unit and/or cause harm or serious injury. Download the manual and save it for future reference.

The Ionic has a round face, but its 1.42-inch, 348 x 250 screen makes up for it. This is the best display I’ve seen on a smartwatch yet, and it provides a sumptuous canvas for Fitbit OS. Coach is a useful app that sets the Ionic apart. Unfortunately, a lot of the other features Fitbit promised are either buggy or not yet ready. :(

Google-owned Fitbit announced a voluntary recall of 1.7 million smartwatches that may overheat due to the lithium-ion battery inside and burn the user.

The recall is for the discontinued Fitbit Ionic Smartwatch (introduced in 2017 and stopped producing in 2020) that according to US Consumer Product Safety Commission (CPSC), “the lithium-ion battery in the Ionic smartwatch can overheat, posing a burn hazard.”